The charity event which was organised by Smart Reader Worldwide® Sdn Bhd and its subsidiary Aim Smart Academics Sdn Bhd, had attracted more than 300 participants on 2nd November 2019, Saturday at Labuan International Sea Sport Complex. Due to poor weather conditions, the 5km walk was cancelled but the participants had a great time with Zumba and doll painting. 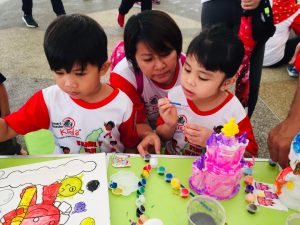 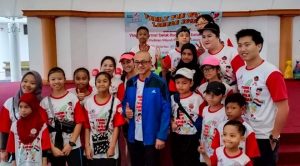 Datuk Rozman, expressed his gratitude and admiration towards Smart Reader® Worldwide effort in raising funds for underprivileged children as well as organising an exciting and virtuous event in Labuan that can be enjoyed by both adults and children.

“While this charity effort will greatly help those in need, it can also encourage citizens of Labuan to participate in healthy family-oriented activities,” he said.

Meanwhile Keefe Ong, in his speech was thrilled to see parents and member of the public who were present during the event. He thanked the participants for their support and generous contribution.

“Last September, we had 2 major events in the Family Fun Walk was held in Kuching and Cyclelah in Kuala Lumpur. We were in awe from the support from the Smart Reader Kids® fraternity as well as the public, which motivated us to pursue a similar event here. We are proud to announce that Family Fun Walk in Labuan had successfully collected RM 7000.00 for the National One Child One Hope scholarship fund. The scholarship programme, initiated by Smart Reader® Worldwide, aims to ensure equal access to quality early childhood education through the provision of scholarships to underprivileged children,”

“In fact, the sons of the late ASP Zulkifli Mamat, was one of the recipients to this financial aid. Their father lost his life while defending the country in Lahad Datu, Sabah,” he said. The National One Child One Hope Education Scholarship Programme is Smart Reader® Worldwide ‘s Corporate Social Responsibility (CSR) initiative, aims to ensure each and every child has access to quality education through the provision of scholarships for underprivileged children. 2019 marks its 10th year anniversary, and to-date, it the programme has pledged over RM2 million, and has funded more than 600 less fortunate children to pursue their preschool education. The organisation will continue this noble execution by collaborating with more Smart Reader Kids® centres nationwide to offer scholarship assistance to underprivileged children in Malaysia. Recently, Smart Reader® Worldwide was conferred the Best Corporate Social Responsibility (CSR) award during the recent Malaysia Franchise Award (MFA) 2019.